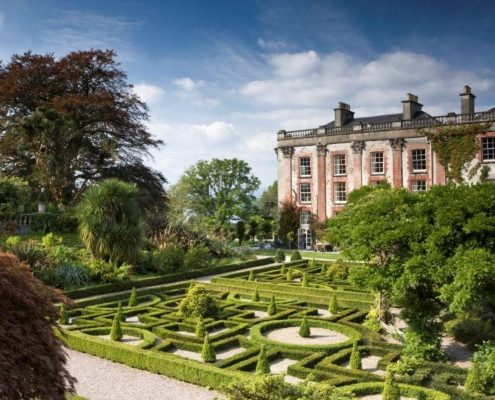 No visit to Bantry could be considered complete without a visit to the stately Bantry House & Gardens. Bought by the White Family in 1765 and enlarged by Richard White, the 2nd Earl of Bantry, it is now lived in and owned by the Shelswell-White family, descendants of the Earls of Bantry. The house has an eclectic collection of tapestries, furniture and art treasures. The beautifully designed gardens are home to a variety sub-tropical plants and shrubs. For more information visit

The birthplace of Sean’s grandfather, Whiddy Island can be seen clearly from Seafort. Just a 15-minute trip by ferry from Bantry pier, you can explore the 7.7 km of walking trails on Whiddy Island. Carpeted in signature red fuchsia bushes, this small island enjoys a wealth of wildlife and exotic plants that thrive here thanks to the warming effects of the Gulf Stream. Don’t forget your binoculars as the two island lakes provide great opportunities for birdwatching.

You can hire a bike or wander along the well-marked trails, part of the Sheep’s Head loop, before enjoying a refreshing drink, fresh seafood salads and open sandwiches in the Bank House, the island’s only pub where Kathleen or Tim will tell you about the fascinating history of the island. They might tell you about the many nations that have tried or successfully occupied or inhabited the island. The failed French Invasion of 1796, when the French Armada was scattered outside the Bay by a violent storm, and only 500 French sailors landed on Whiddy to convalesce.  Three moated forts, known as redoubts were constructed by the British Admiralty when 850 men with 87 horses took a few years to build. They were completed and operational in 1809 at a cost of £51,000 and armed with twenty eight 24 pounder cannons and accessed only by bridge. One of these redoubts is still in existence. although unfortunately inaccessible due to an old unsafe bridge, due for immediate renovation. The US Naval Air Service took up residence on Whiddy in December 1917 with one of their four Irish Seaplane bases, armed with 400hp twin Liberty engine Curtis H.16 Seaplanes, to counteract the U-boats threat. They remained Patrolling the Atlantic shipping lanes until January 1919. 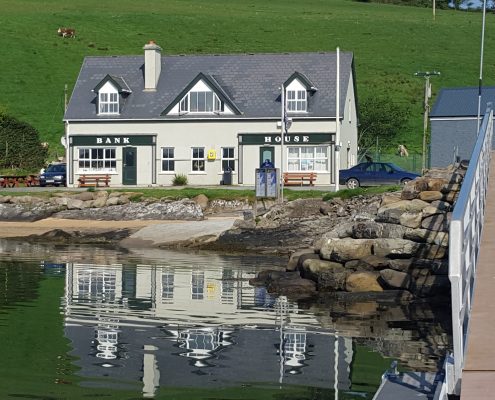 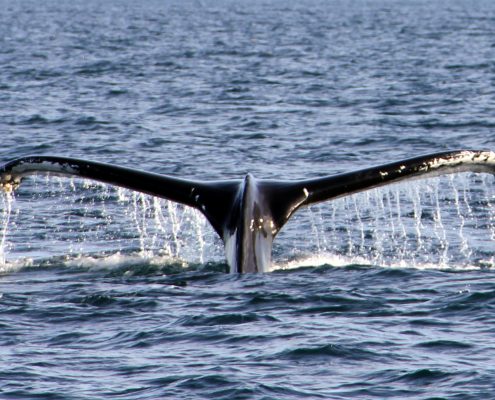 Bantry is the hub and an ideal base for exploring the West Cork Wild Atlantic Way.

The tempestuous relationship between land and sea is evident all along Corks Wild Atlantic Way. This coastal road, one of the most spectacular coastal touring routes on the Wild Atlantic Way, which weaves and winds its way from the northern most regions of the Beara Peninsula right down through Castletownbere, Adrigole, Glengarriff into Bantry. Then on to the rugged Sheep’s Head, and breath-taking Mizen Head, before crossing Roaring Water Bay into Baltimore where you can explore the islands and enjoy some whale watching.

So, take a break and rest with us awhile.

No trip to West Cork would be complete without a visit to the beautiful gardens of Garnish Island. The unique micro-climate on the island has resulted in a vibrant and colourful mix of native flowers and exotic plants and the world-renowned gardens are the result of a creative partnership between the owner of island, Annan Bryce and Harold Peto, architect and garden designer over 100 years ago. George Bernard Shaw was a guest on the island in 1923 when he was writing his play, St. Joan and it is easy to see how poets, playwrights, artists and photographers come here to seek inspiration for their work. The range of oriental and southern hemisphere plants that thrive on the island cannot be found anywhere else in Ireland and Italian architectural influences can be found in the Italian garden.

Leaving from Glengarriff Pier, the ferry stops off at Seal Island on route to the island where the 250-strong colony of harbour seals will happily pose for a photo as they bask on the rocks. The sheltered waters of Glengarriff are also home to a variety of birds such as swans, herons, waders and sea gulls. 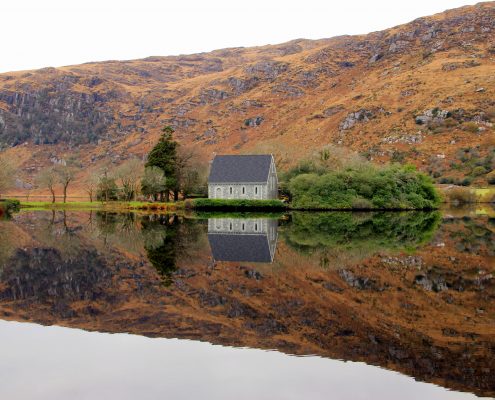 The name Gougane Barra comes from Saint Finbarr, who is said to have built a monastery on an island in the lake nearby during the 6th century. The present ruins date from around 1700 when a priest called Denis O’Mahony retreated to the island. During the times of the Penal Laws, Gougane Barra’s remoteness meant that it became a popular place for the celebration of the Roman Catholic Mass. The nineteenth century oratory which stands near the original monastery is famous for its picturesque location and richly decorated interior and is a popular place for weddings.

Afforestation of the area around the settlement began in 1938 and Gougane Barra is now home to a 1.42 square kilometer (or 138 hectare) forest park with 20 different species of tree, mainly Sitka Spruce, Japanese Larch, Scots Pine and Lodgepole pine, and a large number of native species of flora and fauna. The source of the River Lee rises in the hills above the park and flows into Gougane Lake. The forest park has 5 km of motor trail and 10 km of hill walks, nature points and vista trails.

The Beara peninsular is one of the most dramatic and stunning scenic drives you can take in Ireland, much better than the traffic jam called the ring of Kerry! The best way is clockwise and be sure to visit the stunning views of the Buddhist retreat called Dzogchen Beara  and pop down to the beautiful Lambs Head, take a trip on the only cable car in Ireland over to Dursey Island. Visit the old copper mining town of Allihies, and experience the colourful town of Eyeries, before coming back over the highest most spectacular mountain road in Ireland called the Healy Pass. Alternatively you can visit the magnificent Gleninchaquine, with its powerful waterfalls and superb landscape, before experiencing the Healy Pass home. 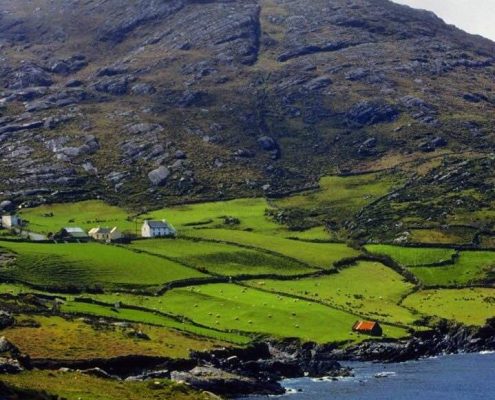 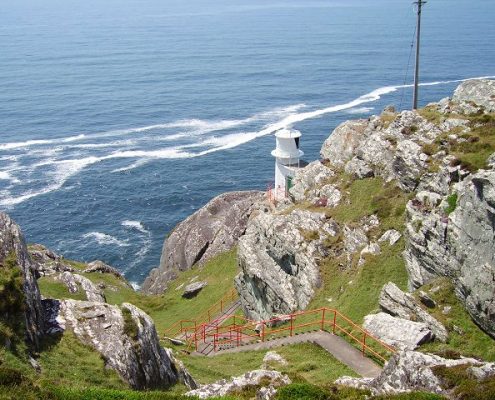 Enjoy a holiday around the Sheep’s Head – it is a peaceful, un-spoilt peninsula which has some of the most beautiful scenery in all of Ireland. A European destination of excellence with over 250km of marked trails and loops this peninsula is also a part of the Wild Atlantic Way. A haven for walkers its a wonderful place to escape to, take the Sheep’s Head Way walking route or instead cycle the 100km route or drive this beautiful untouched part of Ireland. you will soon realise why West Cork is known as ‘a place apart’. Stay with us here in Seafort Luxury Hideaway and take in Bantry bay’s beauty we will let you know where to visit local historic monuments or to go sightseeing. We can assure you that there is something for everyone. More information here on the Sheep’s Head.

The Mizen head is a fabulous drive from the lovely towns of Ballydehob and Schull, along the south coast until you reach Mizen Head. Here you have a selection of activities from the famous walk across the bridge at Mizen Head Signal station, to a lovely walk to find the Three Castles. Hidden behind a hill you will find a 12th century castle, steeped in history and strategically positioned between a cliff edge and a lake. O’Sullivan’s pub provides a delicious open crab sandwich with the most southerly pint of Guinness in Ireland. Drive northwest back through Durres and then Bantry to complete a satisfactory day. 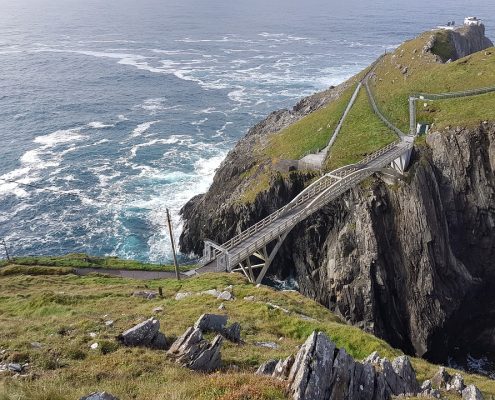